The Virtue – or Value? – of Stories 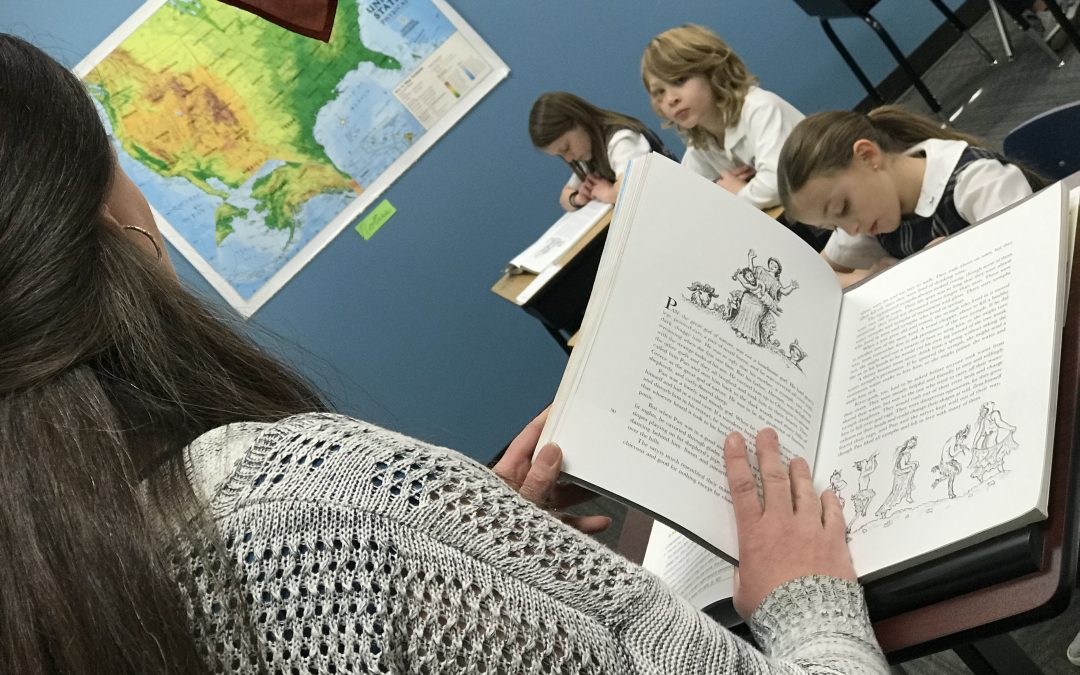 In our last post on Guroian’s Tending the Heart of Virtue, we discussed some of the ways in which stories appeal to and influence the moral imagination of children. Guroian elaborates further on this in chapter 1:

“Fairy tales and fantasy stories transport the reader into other worlds that are fresh with wonder, surprise, and danger. They challenge the reader to make sense out of those other worlds, to navigate his way through them, and to imagine himself in the place of the heroes and heroines who populate those worlds. The safety and assurance of these imaginative adventures is that risks can be taken without having to endure all the consequences of failure; the joy is in discovering how these risky adventures might eventuate in satisfactory and happy outcomes. Yet the concept of the self is also transformed” (26).

One important way in which classical stories transform the concept of the self is by foregrounding the role of moral qualities, or virtues, in the risky adventures that characters undertake. The more virtues a character possesses and exhibits, the more likely they are to overcome, perhaps in unexpected ways, the obstacles that they face. Classical stories dramatize the process of gaining or losing virtue through concrete ways of thinking, speaking, and acting.

Though virtues may be present in varying proportions for every individual, they are the qualities intrinsic to the human person as he or she grows into the stature of their full potential. From a Christian perspective, this potential derives from the image and likeness of God in which human beings were created. The virtues are the building blocks of a human person – both body and soul – who, though having inherited fallen human nature, nonetheless retain the divine image and, through right use of their freedom, attain unto the likeness of God. Another way of saying this is that the fullness of the virtues is holiness.

The language of virtues is not as popular as it once was. As Guroian notes, today “‘values’ are the chief buzzword of the contemporary educational scene” (27). But values are not the same as virtues. The use of the word ‘values’ assumes the validity of a neutral position on matters of morality in pluralistic contexts. Values, in other words, have a “subjectivistic character” (29); each person can adopt or reject certain values as they see fit. This position assumes that there is neither a positive common good in society nor a common purpose or destiny for humankind itself.

Virtues, on the other hand, are qualities that are objectively beneficial for all who possess them. Virtues are perennial; they are the organs that make humans fit for goodness and strong enough in soul for the challenges of life, no matter where or when they may happen to live. Just like muscles to the body, so virtues are the muscles of the soul – and their atrophying is a state of reduced health on an objective basis. Contrastly, values tend to be fleeting, and to apply no further than the borders of the individual. Even within a single individual, values that are espoused one day may be derided the next – they are liable to change. Such change is less like adaptation and more like vacillation, that weakening of resolve so characteristic of the slow slide into self-justification and mediocrity.

Yet virtues are not all about rigor and inflexibility. As Aristotle taught, each virtue is a proper balance or mean between two extremes. Courage is the mean between cowardice and brashness. Generosity is the mean between liberality and stinginess. And so forth. This means that virtues are eminently practical and amenable to the fluctuations of life. Certain circumstances call for one virtue or another; the difference with values is that virtues are universal qualities grounded in relationships to objective reality, whereas values are grounded only in the soft soil of the unstable emotions of the transforming self, and often contradictory. Virtues harmonize, accumulating in mutual reinforcement; values – since they may contain implicit vices – collide.

Classic stories gravitate toward characters who display virtue. Stories about characters who adopt values, however, are harder to come by. Since values “are the instruments or components of moral living the self chooses for itself and that the self may disregard without necessarily jeopardizing its identity” (30), a story about changes in sets of values necessarily adopts more of an interior plot, like in a modern novel. This is fine for mature readers; but even in novels, sets of values are themselves oriented through a larger formation of character in the virtues (or lack thereof).

Values have a place, in other words, but they are always subordinated to virtues, as the latter provide the “value of values,” so to speak. For instance, would we want to adopt the same values as someone who is not virtuous? Would we trust the values of a person who displays more vice than virtue? I think the point is clear – at least when it comes to the content of literature for children. Hypocrisy is not a virtue, after all. Virtues are gained through action, which is the proper material of stories. A story where nothing happens except the verbal exchange of ideas really is no story. Actions not only speak louder than words (and values); in stories, actions give to words their substantial meaning.

As a closing example, let’s look at a parable from the Gospel of Matthew, which seems to indicate the precedence of virtues over values. Note that Jesus in this parable is telling a story to teach something: “But what do you think? A man had two sons, and he came to the first and said, ‘Son, go, work today in my vineyard.’ He answered and said, ‘I will not,’ but afterward he regretted it and went. Then he came to the second and said likewise. And he answered and said, ‘I go, sir,’ but he did not go. Which of the two did the will of his father?” (Matthew 21:28-31).

The answer, of course, is the former; the one whose initially espoused “values” were not good, but who repented and demonstrated his inner virtue by acting in the right way. About the latter – those who profess certain values, but do not act virtuously in accordance with them – well, their actions speak louder than their words. Stories like the biblical parables of Christ show us this in concrete, precise, and lasting ways. And other stories can, too.