The Three Holy Hierarchs & the Trivium 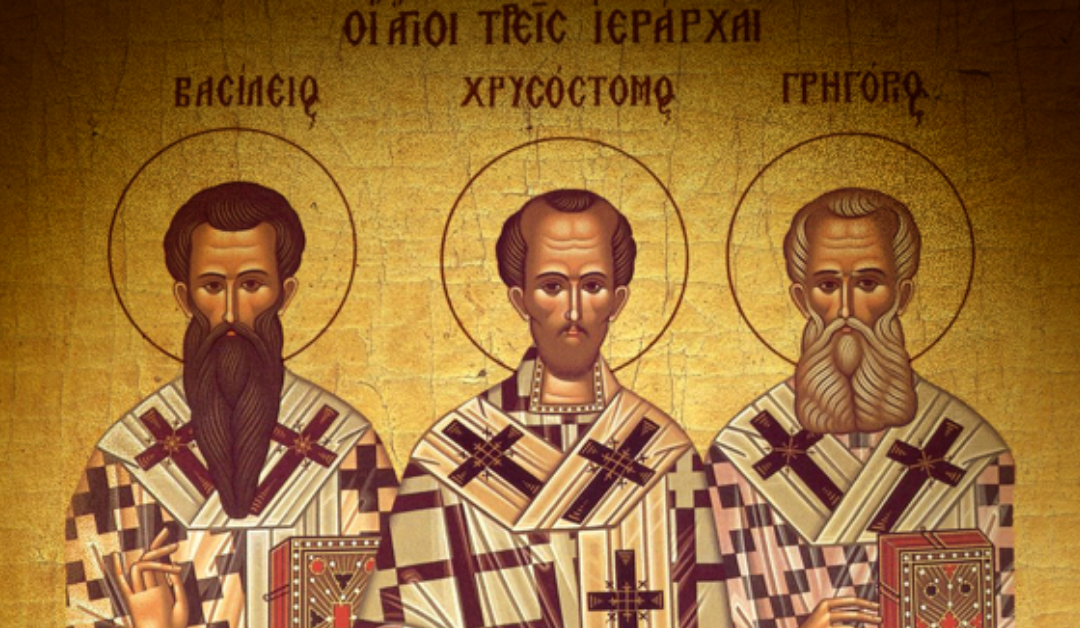 Yesterday (Jan 30) in the Orthodox Church we celebrated a beautiful Divine Liturgy for the feast of the Three Holy Hierarchs, three scholar-saints from the 4th and early 5th centuries of the Church: St Basil the Great, St Gregory Nazianzus (aka the Theologian), and St John Chrysostom.

These three figures together embody a veritable powerhouse of uncompromising virtue, philosophical acumen, and spiritually edifying eloquence. St Basil was the oldest of the three, attending his classical studies in Athens alongside St Gregory and also alongside Julian, the eventual apostate emperor (knowledge without virtue is dangerous)! In a treatise dedicated to the topic, St Basil defended the reading of pagan Greek literature as an important part of education for Christians; it prepares them for reading the Scriptures, familiarizing them with images of virtuous (and vicious) living, as well as with literary genres and conventions. Julian, meanwhile, realized this, and during his brief reign he forbade Christians from studying or teaching literature.

St Basil also delivered scathing homilies against greed and the hoarding of wealth, and composed rules for monastic life, which filtered into the West via St. John Cassian, where they eventually formed the basis for the monastic rule of St Benedict almost two centuries later.

St Basil encouraged the ordination of his friend, St Gregory Nazianzus, who was otherwise quite content to remain aloof from the world in contemplation and study. Heeding St Basil’s advice, St Gregory accepted the great responsibility of the episcopacy. He delivered profound orations that brilliantly articulated and defended Trinitarian doctrine. His intelligent mind and complex yet clear philosophical language exemplify the high goal of liberal arts education, but as put to the service and glory of God. He rather begrudgingly accepted nomination as the Archbishop of Constantinople, a position he occupied only for a few years. His use of the logical principles of classical philosophy in apologetic treatises on behalf of the Christian faith remain some of the most sophisticated fusions of classical Hellenistic learning and Nicene doctrine.

St John Chrysostom was the youngest of the three, and hailed from Antioch. Like St Gregory, St John Chrysostom also became the Archbishop of Constantinople. Like St Basil, St John had a heart for the poor and destitute, and his homilies and commentaries on the Gospels expound upon the joint responsibility of Christians as caretakers and defenders for both right worship (ortho-doxia) in the sacraments and teachings of the Church, and also for the poor. St John’s Greek moniker, chrysostomos, means ‘golden-tongued’, a phrase indicating his rhetorical eloquence. His homiletic exhortations were so moving, primary sources tell us, that he regularly had to ask his congregation to stop applauding in the midst of them.

Each of these three saints is an exceptional example of the powerful combination of knowledge and faith, learning and virtue, study and prayer. They are thus especially important for our school, which likewise seeks to connect these complementary aspects and activities of the human soul. They endured exile and opposition with humility and steadfastness. Their self-sacrificial lives as teachers and bishops followed in the form of Christ Himself.

Beautifully, their unique strengths and God-given gifts also align neatly with the first three language arts of the classical curriculum, known as the Trivium: grammar, logic, and rhetoric. Like grammar in relation to the other language arts, for which it constitutes the basis and starting point, St Basil laid the foundation of faith for his friends, and composed monastic rules for communal spiritual life – like grammatical primers of prayer and work. He also defended the importance of reading and close interpretation of classical narratives, a practice which serves as a primary activity for linguistic and moral formation in the grammar stage of education.

Like logic in relation to the other language arts, St Gregory occupies a middle position, coming between Sts. Basil and John. St Gregory’s philosophical training, attention to the details and contours of argumentation, and brilliant defenses of the doctrine of the Holy Trinity accomplished two great things. First, they delineated the limits of reason, defining its proper boundaries and function in a human life. Secondly, they extended the use of logic onto a higher plane rooted in the experience of prayer and oriented toward the Logos Himself, in whose image we are made (logikos).

Like rhetoric in relation to the other language arts, St John Chrysostom personified rhetoric’s deepest purpose: to convey truth and persuade others – through Aristotle’s three rhetorical appeals of ethos, pathos, logos and the grace of the Holy Spirit – of the goodness of God and the way of salvation through Christ. The apostolic kerygma, the preaching of the Gospel to the nations (given by Christ in the Great Commission), forms the proper and highest telos, or aim, of the discipline of rhetoric. In the context of the late 4th century, with the Greco-Roman world still being Christianized, the eloquent exhortations of St John effectively catechized the fledgling civilization that would come to be known as Christendom.

These three hierarchs together thus form a holy trivium, whose prayers assist and encourage all those who are laboring in study, both in actual schools and in the academy of life under the loving instruction of the Pedagogus, Christ the Teacher.