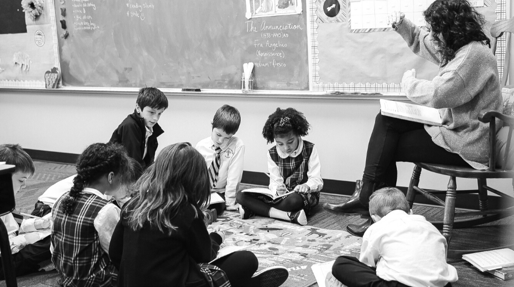 In our studies of the history of the world in 2nd grade, my class has recently landed in the fascinating and tumultuous world of Ancient Rome. From Romulus and Remus through the days of the Republic right up to, most recently, Julius Caesar, the stories, historical accounts, and myths of ancient Rome have captured and enraptured the second-grade students.

They’re not the only ones. I was fortunate enough in college to spend 6 months studying in the beautiful city of Rome. There, history is not something of the past, but an ever-present, ever-living undercurrent that drives and guides life. You cannot walk more than 50 feet without bumping into the ruined remains of a villa from the 2nd century BC or a beautifully ornate church from the 6th century AD. Each piazza, each street, each alleyway, is alive and bursting with the stories of the city’s former lives.

To walk among Rome and to see firsthand evidence of the city’s earlier lives, helps one to understand just how great and just how important the history of Rome is, not just for the people of Rome or Italy, but for the world. It is an education in itself. Travel always is. A properly-educated historical sensibility will grasp this importance. On the other hand, an impoverished education will produce people without such a grasp on the significance of the past. Such an ignorance of history is particularly perilous in a democratic republic like our own.

Although the Roman Republic was formed thousands of years ago, it provided the basis for our own government and for that of so many other countries. It was the continual reference point and role model for the founding fathers. As students of classical history, they knew, as they drafted the seminal documents of our country, that history is not dead: it is very much alive and an integral part of the present.

And yet one’s historical sensibility is always in formation. I am always trying to learn more about history, whether in Rome or Kansas. This has been a basis for how I have tried to teach my class. By referring to my own stories about exploring Rome, using other primary sources, showing pictures, and doing interactive activities such as creating timelines and displaying maps of Rome’s 7 hills, the past has been ushered into the present.

While it was thousands of years ago that Caesar uttered his famous alliterative Latin dictum, Veni, Vidi, Vici!, the magnitude and the importance of his life and his decisions ripple through the centuries and into the ears of second-graders. For them, it is the first time to hear those words. But the world has been grappling with the reality they reflected for upwards of two millenia.

In my classroom, I have sought to resist the modern prejudice which holds that just because something occurred in the past, it is therefore insignificant. That doesn’t mean it is insignificant or ‘dead.’ The past has an afterlife: the present. The past is what has shaped the present, making it into what it is right now. And today is the past of tomorrow.

So while looking to the future is an important part of life and progress, the lesson we can glean from those who came before us will only create a stronger future. Looking behind helps us know where we’ve come from, so that when we look ahead, we have a deeper grasp of what to expect. As Marcus Tullius Cicero once said, “We study history not to be clever in another time, but to be wise always.” Living thus benefits not just ourselves, but others as well. As the poet Longfellow says in his poem, “Psalm of Life,” which the 2nd graders memorize and recite:

Lives of great men all remind us

We can make our lives sublime,

And, departing, leave behind us

Footprints on the sands of time;

Footprints, that perhaps another,

A forlorn and shipwrecked brother,